fri09sepAll Daythu01decMasterpieces for the king? Rubens, Van Dyck, Teniers II from the collection of the Dulwich Picture Gallery 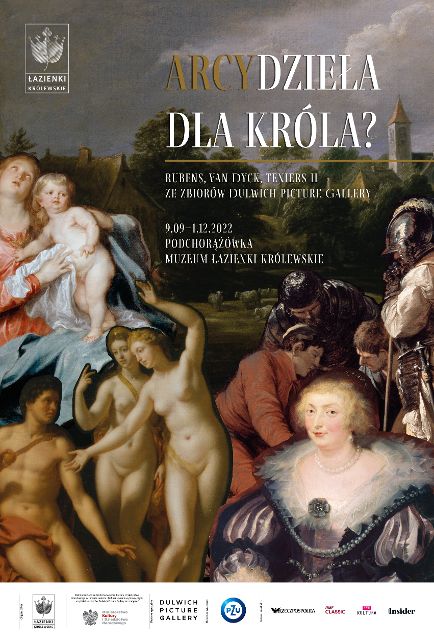 In 1790, during his stay in London, Primate Michał Poniatowski, the brother of King Stanisław August, commissioned the distinguished London art dealer Noë l Desenfans (1741–1807) to buy paintings that would enrich the king’s collection in Warsaw. Within a few years, Desenfans, with the collaboration
of his protégé, the painter Francis Bourgeois (1753–1811), had amassed some outstanding works by Dutch, Flemish, French and Italian masters with the Polish king in mind. However, the king was unable to pay for the paintings. They never reached Warsaw. In 1795, Poland disappeared from the map of Europe and Stanisław August was forced to abdicate.
In London, in 1802, Desenfans published a two-volume catalogue of 660 paintings which he advertised as ‘acquired for His Majesty the King of Poland’. Most of them, as is now known, were not purchased with Stanislaw August in mind. Advertising them in this way was a purely marketing effort
to help the sale of the paintings.

The 1804 list contains 120 works, mostly of very high quality. However, we are not sure whether all of them – and which ones – were acquired as paintings ‘for theKing’.Desenfans bequeathed the collection to Francis Bourgeois. The latter in turn, having supplemented it with further paintings, left it to Dulwich College, near London. Six years later, in 1817, the collection was opened to the public in a purpose-built building. The Dulwich Picture Gallery, an outstanding piece of architecture, was designed by Sir John Soane. The construction was subsidized by Desenfans’s widow, Margaret, and by Soane, who waived his fee.